The findings, to be presented next month in an oral session at the 47th annual meeting of the American Society of Clinical Oncology by Lorenzo Cohen, Ph.D., professor and director of the Integrative Medicine Program at MD Anderson, are the latest in an ongoing effort to scientifically validate the age-old belief that mind-body interventions have a beneficial impact on the health of cancer patients. The research was conducted in collaboration with India's largest yoga research institution, Swami Vivekananda Yoga Anusandhana Samsthana in Bangalore, India.

The study assessed, for the first time, yoga benefits to cancer patients by comparing their experience with patients in an active control group who integrated simple, generic stretching exercises into their lives. "The combination of mind and body practices that are part of yoga clearly have tremendous potential to help patients manage the psychosocial and physical distress associated with treatment and life after cancer, beyond the benefits of simple stretching," said Cohen.

To conduct the study, 163 women with breast cancer (stage 0-3) averaging 52 years of age were randomized to one of three groups: 1) yoga; 2) simple stretching; or 3) no instruction in yoga or stretching. Participants in the yoga and stretching groups attended sessions specifically tailored to breast cancer patients for one hour three days a week throughout their six weeks of radiation treatment.

Participants were asked to report on their quality of life, including fatigue, daily functioning, benefit finding, depression and spirituality. Saliva samples were collected and electrocardiogram tests were administered at baseline, end of treatment, and at one, three and six months post-treatment.

After completing radiation treatment, only the women in the yoga and stretching groups reported a reduction in fatigue. At one, three and six months after radiation therapy, women who practiced yoga during the treatment period reported greater benefits to physical functioning and general health. They were more likely to perceive positive life changes from their cancer experience than either other group.

Women who practiced yoga also had the steepest decline in their cortisol across the day, indicating that yoga had the ability to regulate this stress hormone. This is particularly important because higher stress hormone levels throughout the day, known as a blunted circadian cortisol rhythm, have been linked to worse outcomes in breast cancer.

According to Cohen, developing a yoga practice also helps patients after completing cancer treatment. "The transition from active therapy back to everyday life can be very stressful as patients no longer receive the same level of medical care and attention. Teaching patients a mind-body technique like yoga as a coping skill can make the transition less difficult." 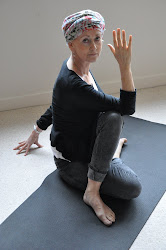 Sighle Mc Donnell.
Sighle Yoga, The Core Studio, Glasthule, Co. Dublin, Ireland
I have been teaching Yoga for almost 25 yrs and I am perhaps best known for classes of Yoga for Pregnancy. My safe, common-sense approach to the practice has guiding "mums to be" successfully through pregnancy, with the confidence to birth well and later recover the strength and well-being needed for motherhood. Sighle is the author of the Yoga for Pregnancy DVD "Labour of Love" In October 2010 I was diagnosed with Breast Cancer. I explored & used Yoga techniques to deal with the many side effects of Chemotherapy and Radiation. Keeping a Video Diary of the sessions has proved to be an empowering process & has helped me to take ownership of my own recovery . I've set out to share with you an honest account of "how it is" on Chemo and Radiation. I'm so grateful for the "tools" of Yoga that I would now like to share my practice with you. Feedback, and any ideas, suggestions or practical tips you might have would be very much appreciated. Thank you.